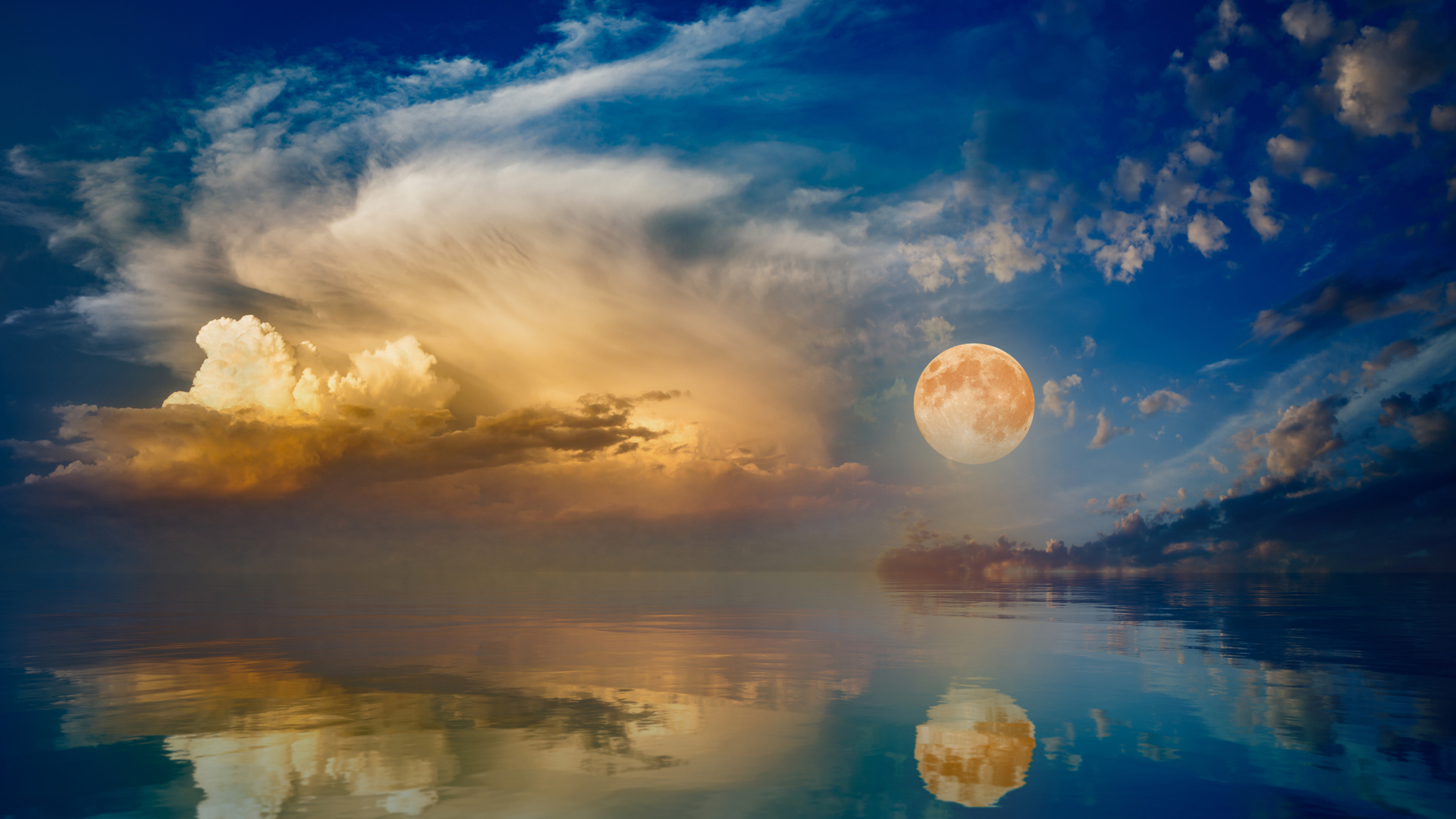 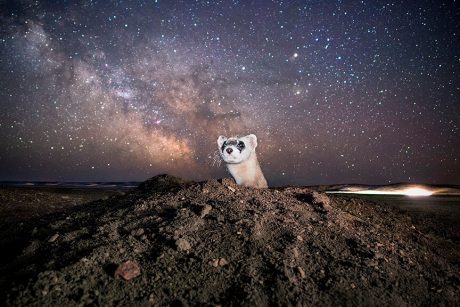 Years ago, when I was deeply involved in the problem of working out the interface between observable constellations in the sky and the astrological signs which are starless zones and do not match the observable figures, I took the step of translating the Greek origin of the word ZODIAC. The original is zodiakos kyklos: ο ζωδιακός κύκλος

Usually translated “belt or circle of animals.” A kyklos is a belt you wear, but it can also mean cycle or circle: you encircle yourself with a belt. Zodiakos derives from the root zoe, “the living, animal life.” Note, by the way, that Zoe appears in Gnostic cosmological texts where she is described as the “flame-born daughter” of Sophia — see below. Somewhere in metahistory.org I commented on the book Dionysos by comparative mythologist and friend of C. G. Jung, Karl Kerenyi, referring to the distinction (correct and essential) he makes between zoe and bios… Actually, it’s cited in NIHI:

Now when Sabaoth (Mother Star) had taken up the place of refuge in return for her metanoia, Pistis the Sophia gave to the Mother Star her daughter Zoe together with great authority so that she might instruct her about all things that exist in the Ogdoad. (On the Origin of the World, 104.26–31)
Zoe is “life force,” but not just as manifested in biological, creaturely life. Zoe is everlasting, self-renewing life. Immersion is the ecstatic life force produced the psychosomatic regeneration of the Mysteries. Mythologist Karl Kerenyi explains that Zoe is the Dionysian factor, the connection to “indestructible life,” contrasted to, the limited biological life-process.

* Ogdoad, the Eighth, is a Mystery term for the celestial realm of starry constellations.

In Course 11 Skywatching you are not merely learning how to read the sky, you are connecting through the “circle of animals” to the indestructible life of the Aeons manifested in cycles of animations. This is a powerful and empowering undertaking. 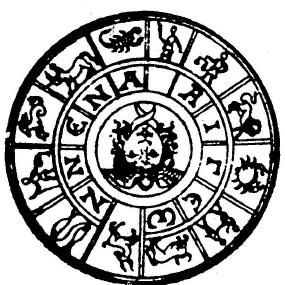 A rare artifact, Roman medallion showing the thirteenth constellation, Ophiuchus, the Snaketamer: At the two o’clock position you see the VIRGIN holding the SCALES, and at the one o’clock position you see the SNAKETAMER. But actually, it is positioned wrongly in the sequence. It should be shown between SCORPION and ARCHER (eleven o’clock position), and the ARCHER points toward the SCORPION not toward the GOATFISH. Despite these errors which indicate a failure of naked-eye observation, the medallion does record the thirteenth constellation which fell into oblivion as the starless astrological signframe came into prominence.

When I translated zodiakos kyklos I changed the meaning to that above, “circle of animations.” It is most definitely not a circle of animals, obviously not. This is from Quest for the Zodiac, c. 1998 edited for this unit:

Zodiac derives from the Greek, usually translated as ‘circle or belt of animals.’ There must be something wrong with this translation, however. It simply does not fit the phenomenon it names. The Star Zodiac is not a naive liquid-crystal display of animal crackers in the sky. A quick scan of the full panorama in Figure Five reveals that few of the creatures are animals. To be exact, there are no more than three animals here. Count them: Ram, Bull and Lion, plus the (mythological hybrid) silly old Goatfish. How could the entire circle have been named after only three components?

Continuing the inventory, we find four strictly human figures. Two of these belong to the same constellation: the Twins, Castor and Pollux. The others are Ophiuchus, the Snaketamer, a man wrestling with a serpent, and a woman of formidable proportions, known as the Virgin, whose body spans 47 degrees on the Ecliptic. This makes a total of four human figures, counting the Twins as two.

Next there is a superhuman entity, the Watercarrier. The view-lines indicate the shoulders of a figure with his left arm outstretched and his right arm extended downward, holding an urn or amphora. Significantly, the composite stars identified with the head of the figure are dim and obscure. Some ancient catalogues suggest that the head of the Watercarrier may be comprised of stars in the composite of Pegasus, the Winged Horse, situated just above it. This would not be unusual, for there are numerous cases of stars shared by two different constellations. The form of this entity is human-like, while the mythological lore asserts that the Watercarrier is not a human being but a deity, specifically the Lord of the Southern Ocean, Ea or Enki, in Sumerian-Babylonian lore. The tally is now three animals, four human figures and a single superhuman entity, a deity.

Then comes the Archer, a hybrid, half-horse, half-man. This is not a human entity pure and simple, neither is it merely a known form of an animal. The Archer is a fantasy-creature, as is the silly old Goatfish, another hybrid consisting of the fore-body of a goat with the tail of a fish or dolphin. Neither of these is an ‘animal’ of the class found in nature as we know it. So, the inventory continues with two weird fantasy creatures.

Next comes a crustacean, the Crab, an arachnid, the Scorpion, and a couple of Fishes. Some nautical cultures make out the Fishes to be whales, and I have found it helpful to retain this designation. In that case, they would be warm-blooded creatures, classified as mammals and thus close to being ‘animals.’ Crab and Scorpion are, strictly speaking, insects, not quite what we call animals. So the inventory continues: two insects and two fishes.

Finally, the Zodiac includes one mechanical image, a human-made device, the Balance or Scales.

This is, let’s admit, quite an odd ‘belt of animals.’ It is difficult to imagine that the ancient Greeks were so poor in their observation of nature that they made no difference between fish, insects, normal animals and bizarre, hybrid animals. Whatever zodiakos kyklos might originally have meant, it had to be something else. I suggest that ‘cycle of animations’ may be closer to the original sense. The Constellations are mythic images, to borrow a term from Joseph Campbell, a comparative mythologist whose work we will consider in Chapter Fourteen. As such, they are eternal entities whose habitat is human imagination, yet they are supercharged with the power of living creatures. They are animated and animating, for they embody ‘meaning’ as a higher form of vitality. 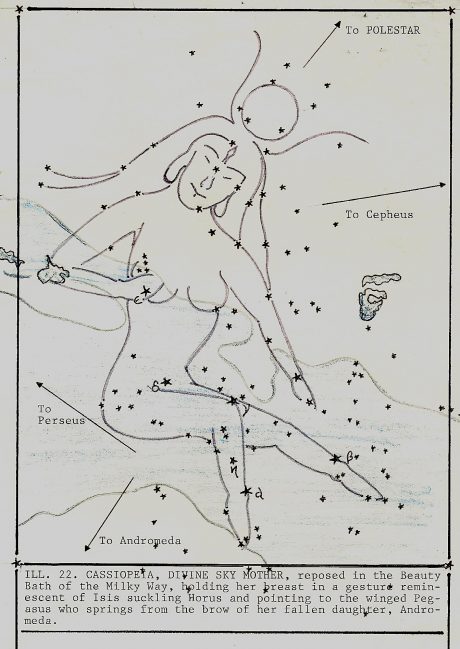 Quasi-Modernist rendering of Cassiopeia, mother of Andromeda. This version portrays her bathing in the Milky Way (wavy lines). Compare with the conventional rendering (below) which requires picturing her upside-down, head downward as viewed looking northwards in the northern hemisphere. This constellation is widely recognized by the distinct shape of its signature stars, forming a splayed W. In other words, people will notice it without knowing that it represents the mythic figure of Cassiopeia. It is situated in the Milky Way between Cepheus and Perseus. It is not an Ecliptic constellation. It is extra-Ecliptic, situated offside the band of the thirteen Zodiacal constellations that present the celestial panorama and main data field for Skywatching. 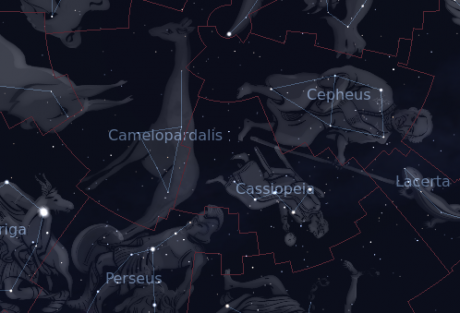 Correction m27: Chapter Fourteen of Quest for the Zodiac, not Not in His Image.

Additional skills of the shaman which I omitted:

Both of which I have demonstrated. If you don’t mind me saying so.

What does Course 11 require that you learn?

First of all, you are required to observe the sky — but hold on, it may be that you do not have the viewing conditions to do so. What then? Does that exclude you from the Course?

Skywatching is an art that combines visualization with observation. Even if you can’t observe, you can still work on the visualization process. You can learn to picture imaginatively what you will eventually, one day, perceive directly with your eyes. So, there are two lines of study in this Course: direct observation, and visual-imaginative orientation, the exercise of picturing. The material of both studies is the same: the thirteen zodiacal constellations on the path of the sun, the Ecliptic Zodiac. Also called the real-sky zodiac, constellational zodiac, stellar zodiac. To be distinguished from the tropical and sidereal zodiac models, as well as the model of Vedic astrology. The operative tool is the Rimsite.

I have explained this problem at length in the interview on futureprimitive.org (see below)

Additionally, the groundwork or entrance conditions for Skywatching require that you learn:

Block 101 The Astral Interface covers all these requirements. 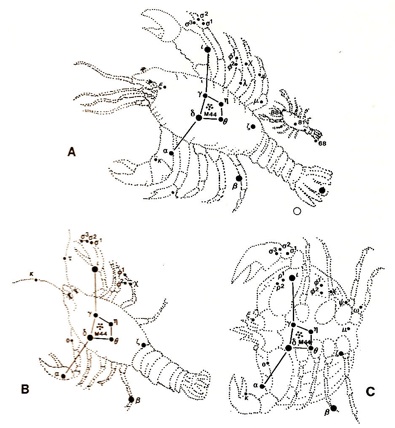 Variations of the CRAB (not Cancer), one of the more difficult of the constellations to picture based on the composite stars and equally difficult to render in graphic form. From Stahl, The New Patterns in the Sky, 1988.

NOTE: Use Constellations of words for research on the lore and picturing of the “cycle of animations.” It contains the full text of the basic research text on sky lore: R. A. Allen, Star Names, 1899.

For an online ephemeris use Astrodienst.

For an archontic support use the app stellarium.org, for orientation but do not become dependent on it exclusively for real-sky observation.

Summary of T&T relative to Skywatching already available in Nemeta: