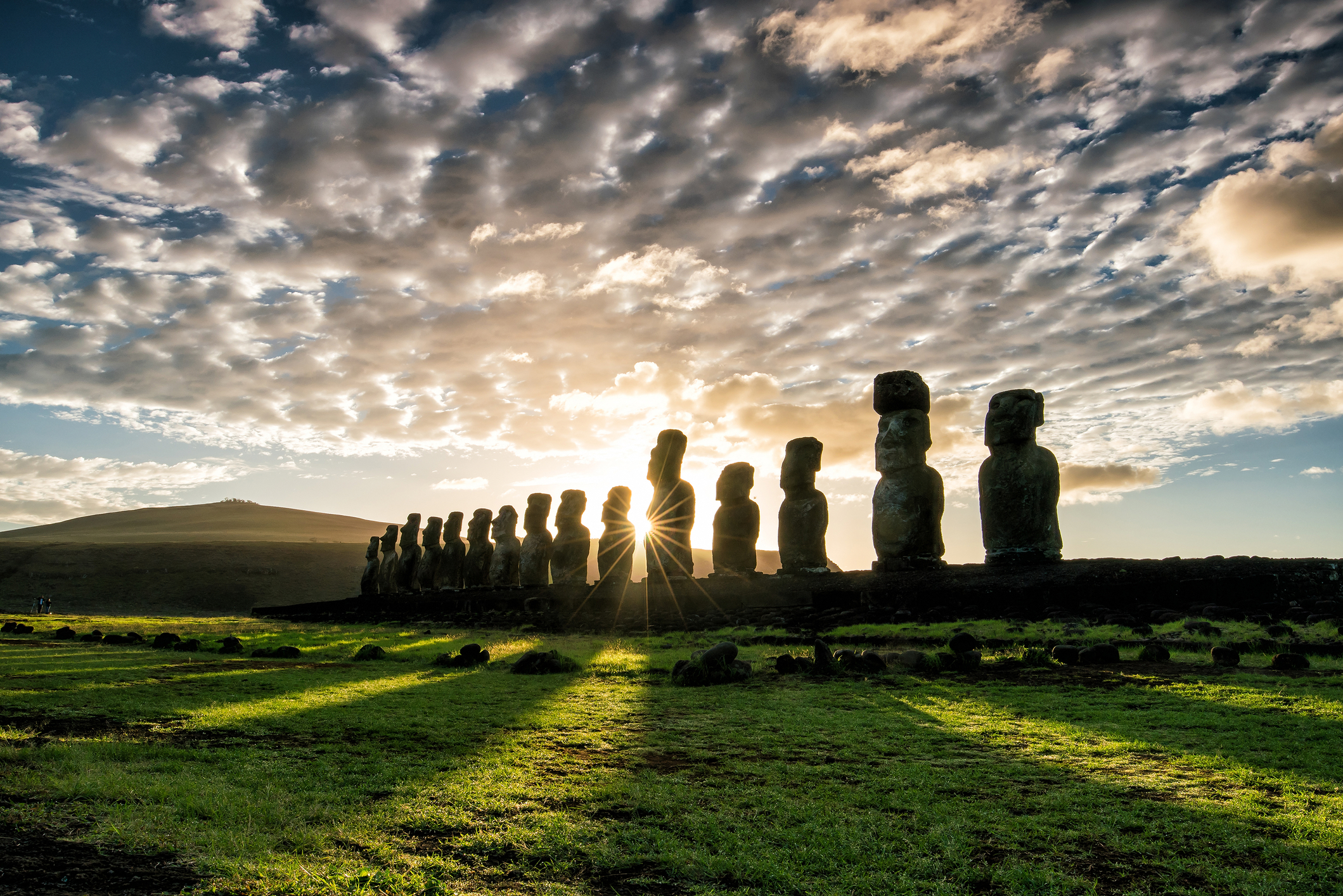 This Course is dedicated to 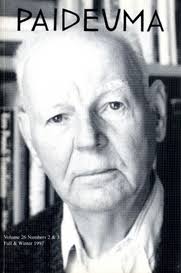 Terry : C. F. Terrell. died 11/2003
Who introduced me to Pound
Published my first piece of serious writing,
And transmitted to me the secret of poetic craft,
“the shape of the line”

§ I have designed Course 7 for those who don’t like poetry, or think they don’t like it, or prefer to ignore it without actually knowing what it is that they ignore, and why. Some may even hold it in contempt. To those many who fit this profile, I propose to open with these lines from a poem titled “Poetry” by American Modernist poet Marianne Moore. 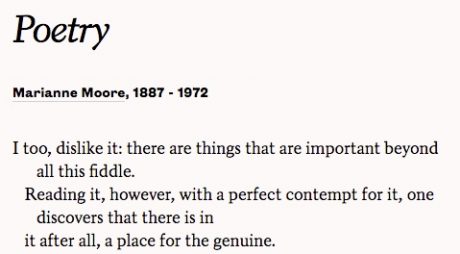 So, I argue at the introduction that learning about poetry and poetics in this Course is a way to locate a touchstone in your emotional field. Poetry is a touchstone of the genuine, of what is genuine in the mind and sensibility of the human animal. And so the objective in these studies is, not necessarily to write poetry or come to like it, but certainly to appreciate how poetry is written and in doing so, to be sensitized to “the genuine,” which of course stands outside poetry, although it is often, in the best cases, conveyed within it.

Concluding that poem, Marianne Moore wrote, “If you demand on the one hand… the raw material of poetry in / all its rawness, and / that which is on the other hand, / genuine, then you are interested in poetry.”

Taking this Course, you may become interested in poetry, or may not. But the value of taking the Course stands on its own terms, as I use poetry like a pretext or a ploy to reveal something else: namely, the trigger of genius. Of course, it is primarily the magic of language, of the spoken and written word, that comes before examination here. That is the kind of magic that can “present / for inspection, imaginary gardens with real toads in them” (MM again). I would have to guess that after all is said and done, some people are simply not language-prone, but operate more non-verbally, visually, pictorially, or musically (excluding the music of words). That’s fine, and to those for whom that is the case, I advise passing on this Course.

At first sight, the topic of poetry might appear to be an odd inclusion in the curriculum of Nemeta. But once poetry is associated with the universal tradition of bards and “folk-singers,” and by extension with shamanism, its relevance is clear. I personally believe it would be a massive omission on the teacher’s part to delve into shamanism without including an excursion into poetry and poetics. Consider the Tain Bo Cuailnge (Tawn Bo COOL-in-yuh — the Tain, for short), the principle legend in the Ulster Cycle of Irish folk myth. The Tain is a shamanic mystery tale clothed in the chaotic story of a cattle raid. Although it is written down in prose, it is a genuine remnant of the legacy of poetic bards who recited the folk-memories of the peoples, the clans. A key figure in the Tain is Queen Medb or Maeve (pronounced mave, rhymes with wave) who reigns over Connacht (pronounce Con-NAHT). This name is itself a deep slice from the lore of indigenous shamanism:

The Old Irish proper name Medb/Maeve derives from the Proto-Celtic *medu- (“mead”) or *medua (“intoxicating”). The name is a title for the “mead-woman” or “she who intoxicates”. Hence a direct parallel or correlate to the “grail maiden” of Arthurian legend. Although given to a human female, the name has been associated with the power of a “sovereignty goddess” — scholarly jargon for a goddess figure who bonds the people to the place where they arise. In ancient and medieval Ireland, drinking mead (most likely a psychoactive potion) was part of the royal inauguration ritual. In Celtic myth that forms the basis of the Grail Legend, a supernatural witch (dakini, devata) bestows sovereignty of the land upon the king, and likewise, inspiration upon the shamanic-poet who drinks from her cup of mead. The Proto-Celtic *medwa means “the ruler,” and may refer to the fact that a candidate for rulership of the tribe had to qualify by undergoing an initiation ritual with the use of a psychoactive potion.

A passage in the Tain recounts the encounter between Queen Maeve and Fedelma, a witch known for her ability to see the future:

Scholars translate the Gaelic imbas forosnai as “Light of Foresight.” This rendering reminds me of the routine translation of pronoia as “foreknowledge” or “providence” among Gnostic scholars, though “intuition” in more accurate.

Imbas forosnai is the gift of clairvoyant-clairaudient apprehension of the natural and supernatural worlds. It was the primary mark of the visionary ability of poets of ancient Ireland. Hence, the poet had to be a shaman, but not necessarily every shaman was a poet. In short, imbas forosnai was mantique, divinatory skill.

The Old Irish Imbas means “inner knowing, inspiration,” the divine gift of the fili, visionary poets (called ollav and ollum in Irish, skald in Scandanivian lore). Forosnai, “illuminated” or “that which illuminates,” contains an allusion to phos and phosphor, light and light-holder. The Gnostic masters were honorifically called Phospors, “Illumined ones.” The witch Fedelma is a guide to the Otherworld, gifted with the shamanic power to shift back and forth between the natural and supernatural worlds.

Now, notice Fedelma’s subtle response to the question of Queen Maeve: “Where do you come from?” She does not come merely from a literal place but “from learning verse and vision” in Alba. What place is Alba? That word is the Gaelic name for Scotland. So Fedelma is a Scottish witch, but responding as a witch she answers in a dual tongue, Idris-style: Alba is Scotland and it is also “whiteland, the whiteness.” Alba derives from an Indo-European root meaning just that, white.

In short, Fedemla confesses to acquiring verse and vision from “instruction by the Light,” the method of the Mysteries.

I said it was a deep cut. 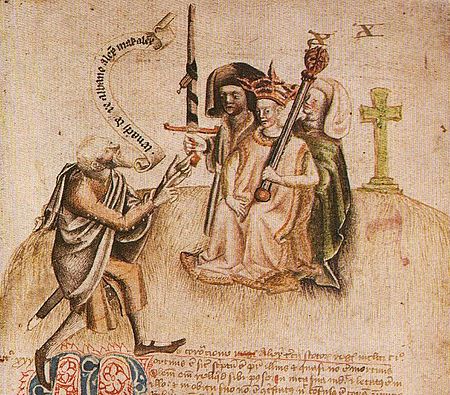 From Wikipedia for Alba: Coronation of King Alexander III on Moot Hill, Scone on 13 July 1249. On his right is the ollamh rìgh, the royal poet, who addresses him with the proclamation Benach De Re Albanne, “Blessings to the King of Scotland.” Consistent with the role of guardian of the folk-memory, the poet-shaman recites the geneology of the king (phylogenetic memory).

The landscape of poetry today could better be called a landfill. For some time now — as will be explained in the Blocks of this Course — poetry of the genuine sort, crafted poetry, has been buried under heaps of garbage talk, such a slam poetry, rap, and gangsta rap, to mention the most obvious examples of the egregious corruption of the spoken word in our time. Although I will indicate what happened to poetry around the time of the Black Mountain cult (1950s), this Course does not require getting to know a lot of poets. I have set it up so that you only have to get to know one, and that one will be your guide to the entire realm of modern poetry and poetics.

Your guide for Course 7 will be Ramon Guthrie (introduced in Block 101). In the famous tale of the composition of The Divine Comedy, Dante’s guide was the radiant Beatrice, typical of the mystic woman who inspired the male poet. She was a variation of the classical muse, known as the “Beautiful Lady” to the Russian Symbolists Biely and Blok. (Yes, there is a Block on Russian poetry.) Here I am reversing the gender roles and making Ramon Guthrie the Beatrice-like guide on your tour of the spiraling worlds of modern poetry. The only required reading is Maximum Security Ward, exemplary of poetic craft. 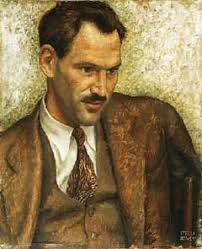 M. L. Rosenthal (Xenosh Hall of Honor) was a close and long-time colleague of Terry’s. You are looking here at world-class scholars of Modernism, Pound, the Romantic tradition, language studies. Rosenthal was one of the few scholars of high esteem who championed the work of Ramon Guthrie, otherwise regarded as a lesser or marginal poet of the 20th Century. One scholar, Germaine Bree, wrote of Asbestos Phoenix, the final collection of Guthrie’s poems, that it “alone would place Ramon Guthrie among the major poets of the mid-century.” His masterpiece, Maximum Security Ward, eventually gained critical acclaim due in large measure to M. L. Rosenthal promoting it. Critic Malcolm Cowley noted,

“Among the talented writers I have known, the most curiously neglected is the poet and scholar Ramon Guthrie. He started out with the famous writers of the World War I generation, Hemingway, Faulkner, Fitzgerald, and others, some of whom were his good friends. His best writing was on a level with theirs.”

In short, Guthrie is an outsider for academia, but for these studies he is the ultimate insider, and the main informant. As the content creator of Course 7, I can guarantee that if you make the effort to know Guthrie, the man, consider his poetry, and accept him as a guide, you will not need to investigate any other poet. If you get what I am putting together behind Guthrie, by knowing only that one poet you can know just about all that is required to appreciate poetry in depth, whether or not you like to read it or choose to write it!

As I said, and this says it all, poetry is a touchstone to what is genuine in the mind and sensibility of the human animal. 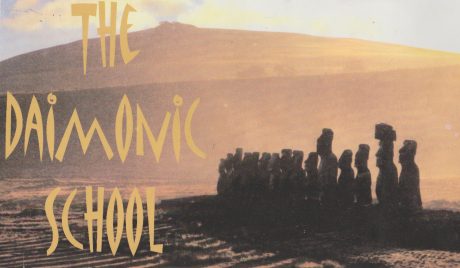 Original theme image for Poetics Course: The gigantic heads on Easter Island are totemic spirits who might be imagined as acoustic insulators that carry sound currents in the way high-tension wires carry electricity.

So, I am pitching this Course with a shamanic spin, so that the material resonates closely with the Mysteries, the Grail legend, mantique and other prominent themes of Nemeta, and offering the Late Romantic, self-styled troubadour as your guide.

to write or not to write

Course 7 Poetic Craft in Nemeta requires no former acquaintance with the subject matter, or any particular knowledge of modern poetry and how it is crafted. By contrast to poetry that is not crafted. Big distinction.

The course is not intended to teach the writing of poetry — not exactly. Rather, it does something more comprehensive that will catch the attention of those who are not inclined to write poetry, perhaps due to lacking the impulse or confidence to do so. Poetic craft goes one better than teaching how to write poetry: it teaches how poetry is written. Good poetry, authentic poetry, crafted poetry. The leading assumption is, poetry is not really genuine unless it is crafted. You will certainly be surprised to find out what “crafted” means.

Closing remark: My aim here is comparable, say, to describing how a bicycle is designed and constructed. That could be of interest even if you do not wish to ride a bicycle…. You have a relation to what is genuine in any area of human endeavor when you know how it is produced.