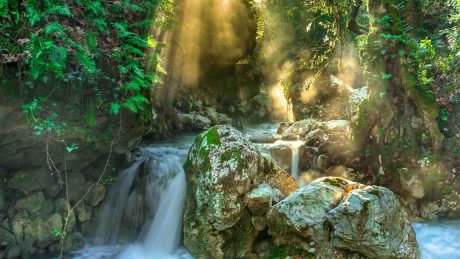 Nemeta invites dedicated donations toward these projects. Terma Publishing can offer an investor agreement with an interest-free return on percentage of profits derived: for instance, 5% of net sales revenues for a selected title.

Projects on the planning table at NEMETA are varied and numerous, deriving from JLL’s pre-Terma and post-Terma output. Essentially, they fall into two categories: books and tools. 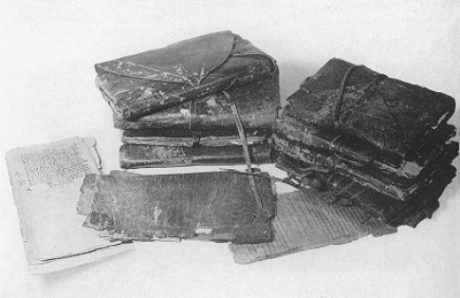 Nag Hammadi Codices, the oldest survival example of leather-bound books consisting of small rectangular pages cut from papyrus leaves. Dated to around 314 CE from material in the binding.

Bear in mind that NEMETA comes into the world with the “add-on” of Terma Publishing. JLL has made it abundantly clear that he wishes to see the content of his legacy progressively extracted from cyberspace, and to stand on its own in material artifacts, independent of the internet and IT devices.  He established Terma Publishing with the goal of producing books without reliance on publishers.

Of course, it is a considerable commitment to set up a self-publishing operation. It requires in the first place editors to prepare the text for publication, graphic artists to design the book, and a team to print and distribute it, not to mention management of promotion and sales. Quite an undertaking, certainly, but John is adamant that his work be published in this manner rather than through the usual channel of a publisher who acquires rights to the work and returns something like 10-12% of gross revenues to the author. He has never been fortunate in the publishing game. As it stands today, he only receives royalties from one book, the domestic edition (Chelsea Green) of Not in His Image, which can be described as a nominal sum.

The option of self-publishing via Terma is demanding but it does at least afford the chance that those involved will be remunerated according to a profit-sharing arrangement that would apportion all the gross revenues to those involved. In that way, the profits would go to committed student-teachers of Nemeta and not to a third party who rewards the author’s work with a mere pittance.

The tool for self-publishing used by Terma is In Design, the professional standard. So far, Terma Publishing has released one book, the Spanish translation of Not in His Image, No a Su Imagen. Creating the material artifact of the book is the easiest part of the process. Networking, promotion, and distribution are far more work-intensive aspects of self-publishing which require a team set-up, comparable, but on a modest scale, to the staff of a publishing house.

At the launch of NEMETA, there is no staff in place to produce books. But in the future, the staff will take form,  depending on how NEMETA grows and gains the adherence of members and enrolling students. Additional to revenues from members and enrollees, it is imperative to have donations going toward particular book projects. A dedicated donation of, say, $1000 or $5000, could cover the expenses of producing and printing a book and also provide the funds to pay the team working on promotion and distribution. For instance, a blog could be created with the specific aim to promote a book from Terma Publishing. The blogger would then receive a salary for promoting the book online. Those who handle fulfillment of orders and do accounting for sales would be in a similar position to be paid for working on the NEMETA staff as free-lance associates.

As soon as possible following the launch, NEMETA will propose its initial book project: Gnostic Sabotage in the Book of Revelation. Subtitle: How Christianity Carries the Seeds of Its Own Destruction.

See below: the  “curriculum panel” presents individual entries on works in progress.

Handled correctly, such a project could bring considerable financial return to NEMETA. Although NEMETA is strictly a university-type non-profit organization, the revenue-generating potential of JLL’s writings are quite extensive — not to say monumental. Thus Terma Publishing would operate as the “university press” for the academic institution of NEMETA. As such, it would stand legally and  financially distinct as a structure.  Other titles in waiting:

Dendera Decoded: Our Unique Moment in the Cycle of World Ages

The Once and Future Grail – An Alternative History, 2 volumes: I The Diaspora of the Mysteries, II The Mythogenetic Moment

Wise as Serpents: Entheogenic Religion and the Paris Eadwine Psalter

Severed Rose* The Legacy of a Free-Lance Terton

The Yeats Conversions* –  One: Refuge for the Unborn, and Two: Tantra Outbound

Translations from the Andromedan*

Quest for the Zodiac – Revised and Updated New Edition

Bear in mind, this is a partial list. Some, but not all, of the textual content for these books has been released on metahistory.org but now comes under restricted access in NEMETA. Some of the books are ready to be edited and published; others are in an incomplete state. The * indicates book projects for Terma Publishing that include a CD-rom: for instance, the poems of the Yeats Conversions. JLL visualizes Translations from the Andromedan in a large format (“coffee table”) edition with verse in an attractive font on the left-hand page and comments and illustrations facing on the right. The book would be out with a CD-rom of his readings of the Slokas.

NOTE: Previously found on metahistory.org, some but not all portions of Translations from the Andromedan are set to be released in learning path 6, Living Myth.

Obviously, the horizon for Terma Publishing is broad, and the choice of conversions is rich and varied. One of John’s goals with NEMETA is migration from IT/electronic format to hands-on textual artifacts. How many of these book projects can be realized while he is still around to see them through is of course impossible to say. But one thing is eminently clear: donations dedicated to a specific book will hasten the process of production and, more importantly, provide John with the right living conditions and editorial/design assistance that allow him to bring out the books in an optimal manner. He is confident that each book project, considered individually, will not require a lot of time on his part — given he has the support he requires to bring it to completion.

In short, donations directed to specific books will buy precious time. Those who donate for this purpose will receive autographed complimentary copies, consistent with the age-old tradition of patronage to authors.

This category of Projects includes a remarkable spin-off of the Terma of Gaia Awakening: The Kali Dice Oracle. See below.

Once up and running, NEMETA will occasionally send out announcements of positions open, inviting people to apply for undertaking tasks in creating such products.  The Oracle can be released as a franchise. JLL sees the KDO produced as a kind of “cottage industry” enterprise. The manual would appear in five languages: English, French, Spanish, Italian, and German.

Finally, there are other products and kits and items relating to Planetary Tantra, and the  Kalika War Party. Posters, T-shirts, etc…. but these items, if and when they appear, will be found in the Treasure Chest, comparable to the university fetish and souvenir shop.

Finally, bear in mind that funds received by Nemeta from members and enrollees go exclusively to maintain the School. Participation of 50 members annually will provide the minimal funding required to keep the School up and running, pay for the facilities (library, offices, work stations, guestrooms for visiting students), the minimal salary of the Administrator (currently acting also as editor in chief, as well as handling email and all-around problem-solving), tech assistance, internet services, printers, computers, and IT expenses. As the gateway of Nemeta opens in September 2018, the School Admin is the sole person receiving a salary. As the School grows, the Admin will be able to hire skilled individuals and consultants for particular tasks that arise.

John himself receives no salary from funds incoming to Nemeta. After putting out so much written and spoken material totally for free over so many years, he realized that the future of his legacy could not be secured by continuing in that way. Offering his work free became counterproductive to the continuance of the work. Unless funds were provided to construct and maintain a structure to sustain it, there was no future for his legacy. Such is the purpose of Nemeta, and the need for financing it: to enable a body of achievements to survive, not to reward or remunerate the author of those achievements.  Indeed, it may be worth pondering what kind of return would be fitting and adequate for a lifetime accomplishment of this richness, depth, and magnitude.

Needless to say, volunteers with proven skills to offer are always welcome on the Nemeta staff.