Brave Dreamer, recognize the dreaming power that brings you here! To approach Nemeta, picture an open, leafy campus with a commons (“student union”) shrouded by the ceremonial Banyan Tree and, facing it, a large and elegant structure that houses 12 Classrooms (Courses) and 3 Great Halls (Vocations). There are reception areas for all Classrooms (the Course landing pages) where guests can look around and can consider the material on offer. The Great Hall 16 of the Sophianic School, Planetary Tantra, is entirely open to guests, and all material posted here is open source, accessible at no charge. 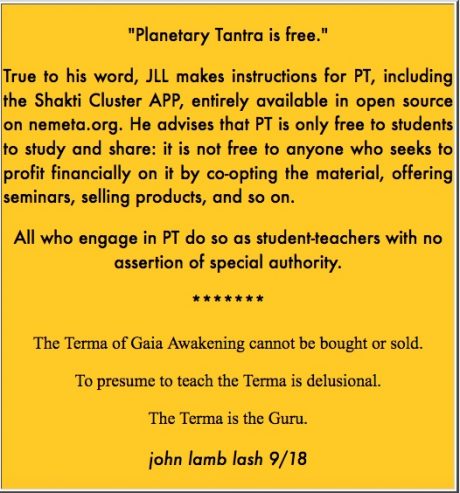 **Go to The Menhir for the current lunar cycle (Dakini Shift)**

“The Dakinis are Devata (radiant-emergent) aspects of the Forces of Nature. Work with them and success is attained. Work against them and ill-fortune follows.  Identify the self with the partial aspects which are the yoginis (bonding forces) and then various Powers (siddhis: occult faculties) are attained. Identify the self with the Great Yogini Herself and the human creature is liberated. This is the Shakta teaching.”

Course 16 on Planetary Tantra comprises a massive array of material, some of it new, much of it taken from metahistory.org and elsewhere, but here organized, corrected, upgraded, and revised. It will take some time to pull this enchilada together. The Manual of Planetary Tantra which has been long in the works is set to come out as a hard copy artifact from Terma Publishing.  I will not and cannot name a particular deadline but I do wish in the course of 2019 to have Course 16 in some semblance of clear organization order.

To review the original landing page for Planetary Tantra on metahistory.org, click here.

NOTE: I have added this talk from 2018 on January 14, 2020 for the purpose of orientation to visitors. Ginny, Crooked Claw, and myself discuss six points about the unique version of Gnosis that comes with Planetary Tantra. This talk raises the issue of the great dissent, the rejection of Christianity. “No, no, no. I’m not going to rehab in a salvationist gulag.” It also alludes to the taunting meme of “hijacking”  Tibetan Buddhism which today assumes a form that could not have been foreseen at that moment — DOG ZEN. The verification of encountering the Organic Light by the detecting a drop of temperature that actually does not occur in the ambient temperature is a salient point, one of the wonderful proofs of the veracity of the telestic method, which can be consistently tested. Everyone who encounters the Organic Light has the same experience.

So, how to get started with Planetary Tantra? Everyone who comes to this “field of dreams” faces the same question, Where to dive in first? The immensity, diversity, novelty and richness of the content can be overwhelming. In truth, if you are not overwhelmed, you are not getting it!  And that sensation persists in time. PT never becomes habituated or cliched. Or if it does, you are not handling it correctly.

Traditional Buddhism in the genre of the non-attainment schools uses the nifty term bodhicitta (BOW-dee-CHIT-tah) for the thrilling sensation of hovering constantly on the verge of enlightenment. Bodhi means illumined, awakened: in gnostic terms, the enjoyment of the full power of your intelligence grounded in the naked awareness of mind in its own nature. Citta is a variant of cit, pronounced CHIT, with a hard accent on the c.  Cit is consciousness itself, with or without an object. Any claim to “spirituality” in this day and age has to be proven and demonstrated, authenticated by the correct use of intelligence based on knowing how consciousness works, both affecting the world-event and being effected by it.  Otherwise, it is just empty talk.

On these primary notions, you can always remind yourself why you choose to attend Nemeta and engage in PT: to get your cit together. (“Get your shit together” being an archaic meme of the 1960s).

The routine translation of bodhicitta is “inceptive bodhi” or “the thought of enlightenment.” In non-attainment teachings (virtually unknown to most people who get involved in Buddhism of any kind), inceptive bodhi means that merely entertaining the notion that you can be enlightened brings you to the verge of being so. Some texts assert that the mere conception of what enlightenment is enlightens you.

There is deep wisdom in this assertion, as traditionally stated, but it can be taken to an even deeper level through the practice of PT. As I have insisted time and time again, and will continue to insist, Planetary Tantra based on the Terma of Gaia Awakening clarifies and amplifies all that is genuine and sustainable in Buddhist teachings. It makes it over and goes to the goal with it.

Not to get too fancy at this moment, let me propose for the sake of orientation that bodhicitta means “inceptive syntax.” Compare it to the source code of a computer app. All the functions of the app depend on the integrity of a certain array of propositions in the source code. Likewise with PT where you encountered an array of terms, phrases, and memes that present the inceptive or primary syntax for the entire wisdom system. Here are some examples:

The list goes on, but those terms are enough for initial grounding in the practice of PT. Consistent with the passage from Woodroffe, bonding yourself intentionally with the power of the Earth Mother is the purpose of Planetary Tantra. The “magic” to be discovered and tested in this adventure happens through the coupling of human forces with the superhuman matrix of telluric powers displayed in the Shakti Cluster. Bear in mind, always, that the Shakti Cluster does not merely present a schematic display, like the circuit diagram of a television, but is itself the actual instrument for interactivity, the app.

Finally, a note on Sanskrit and Tibetan terminology: (Forthcoming)

The curriculum panel for PT is similar to that of all Courses on Nemeta, with the difference that only staff (student-teachers who support the school materially and creatively) can access the units in the 12 Courses. Once you are signed in as a guest, using your password, you are free to access any unit in the Great Hall of PT. Note that you may have occasion to click the START COURSE panel (blue, upper right of this page) to activate or re-active your access.